The Summer Games is one of two annual championships held at the conclusion of each sport season, with athletes coming together from throughout Southern California. 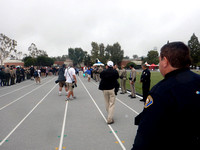