Thank you for your patience while we retrieve your images.

Bruck An Der Mur (Bruck on the Mur, i.e. Mur River) is one of your everyday picturesque villages located in the Austrian state of Styria, having a population of approximately 13,500 people, and rich with culture and history, including a trade in scrape metal that dates back to around 800 BC.
But this year, Bruck An Der Mur is one of the Austrian cities chosen as a Host Town for Special Olympic World Winter Games Austria 2017. During the Special Olympic World Winter Games, host towns provide accomodations for the various athletes from around the world and transportation to the various event venues. In addition, for three days before the games, the various host towns introduce and immerse the athletes to the local culture and traditions, and hold interculteral social events - experiences that no doubt will impact the lives of these athletes and forevermore enrich them with memories that will last a lifetime.
On March 15th, Bruck An Der Mur had a cause for celebration - after being ignited in Athens, Greece in early March, the Flame of Hope (Olympic Flame for the Special Olympics) arrived at the quaint town on the final leg of it's 50 Austrian town journey by members of the Law Enforcement Torch Run (LETR) comprised of 80 law enforcement officers from around the world; 10 which are from Austria, and 10 international Special Olympics athletes along with numerous police cadets from Austria. The LETR was founded in 1981 in Wichita, Kansas by Wichita police officers would wished to support the Special Olympic athletes. To date, more than 100,000 law enforcement officers from around the world are members of and actively support LETR, with approximately 50 million dollars raised annually for the Special Olympics.
As the Flame of Hope was proudly carried into the city square to the welcoming cheers and applause of the crowd, I was filled with an immense sense of gratitude to be able to capture images of this sight to see to share with those that cannot. The following celebration included inspirational speeches by, to list just a few, a city official, the Bruck An Der Mur Chief of Police, and one of the athletes named Albert Masser who lives on a farm in the nearby town of Lannach in the Austrian state of Styria.

I watched in admiration as Albert spoke and noticed he could hardly could contain his enthusiam and excitement as he shared his feeling of honor to have been chosen to help carry the Flame of Hope. Before Albert left the stage, the Chief of Police presented him a set of lapel insignia making him an Honorary member of the Bruck An Der Mur police force...it was all Albert could do to contain his excitement.
Adding to the festivities were numerous townsfolk who brought the event to life with their cheers and support for the much deserving athletes and law enforcement officers. All in attendance were treated to a mix of pop music by the Austrian band "Mundwerk" (http://www.pius-mundwerk.at/index.html) meaning in literal traslation, mouthpiece, comprised of 10 special needs musicians from the town - I could have closed my eyes and easily imagined being in a sold out standing-room-only stadium listening to this band as they were that good. Then there were the dancing group, "Roeckers" (http://www.rossecker.at/index.php/die-rossecker) founded in 1920 and named after the 1664-meter-high mountain "Roeckck", who treated those present with authentic Austrian cultural dances.


The ceremony ended with the spectators excitedly greeting and having photo ops with the athletes and officers of the LETR, along with city officials. Smiles, grins, and congratulatory handshakes and hugs were in abundance this day, a day of celebration and awareness for the Special Olympics, and a day among many I have experienced that revitalizes within me the reasons I do my part and why the Special Olumpics "touches" me deep within my core.

I watched as the Flame of Hope was carried out on it's continuing journey to it's final destintion at the Planai stadium in Schladming where, on March 18th during the opening ceremonires, law enfrocement officers will hand the Flame of Hope to a Special Olympic World Games athlete who will ignite the Olympic fire, officially marking the start of the games during the opening ceremonies. When that cauldron is lit, I know for me, as well as many around the world, will be a moment that will stir up in me a profound sense of inspiration and pride that will forever dwell within my heart and soul. 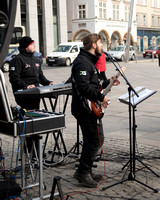 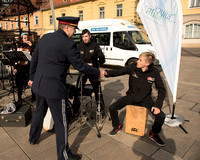